Molecular Systems Chemistry for the Efficient Utilization of Photon Energy

Overview
Publications Relevant to the Project

Photon energy conversion materials and devices – such as semiconductor photocatalysts and solar cells- suffer from the limitation in the wavelength of sunlight that can be used. As a method for solving this problem, (1) singlet fission (SF) and (2) photon upconversion based on the triplet-triplet annihilation (TTA-UC) mechanism have been attracting attention.

Purpose and Background of the Research

The study of TTA-based photon upcoversion has been historically conducted in organic media by taking advantage of molecular diffusion of the donor (D) and acceptor (A) molecules. However, the use of volatile organic solvents limits their applications. In the solid phase, donor and acceptor molecules usually do not mix homogeneously and tend to form molecular aggregates or exert micro-phase separation, which lowers the efficiency of D-to-A triplet energy transfer process. To overcome this issue, we have developed TTA-UC based on the self-assembly of acceptor molecules that harvest singlet and triplet excited energies by energy migration (Fig. 4). We have pioneered the molecular self-assembly-based, air-tolerant TTA-UC in the visible light region in various molecular systems in which the compatibility of the donor and acceptor molecules was taken into account. 1, 2, 5
On the other hand, TTA-UC from the near-infrared light (NIR) region to the visible light (VIS) region is more important, which has been investigated for organic amorphous nanoparticles doped in polymer films.6, 7
Obviously, we need to develop NIR-to-VIS TTA-UC system in which controlled molecular self-assembly holds pivotal roles. In addition, “Supramolecular SF” based on the self-assembly of designed chromophore molecules, remains an undeveloped field. In this project, we aim to tackle to the following challenges.
1. Supramolecular SF in well-designed, self-assembled molecular systems
2. Efficient NIR-to-Vis TTA-UC at low excitation light intensities by combining molecular self-assembly and nano-gap plasmonics. 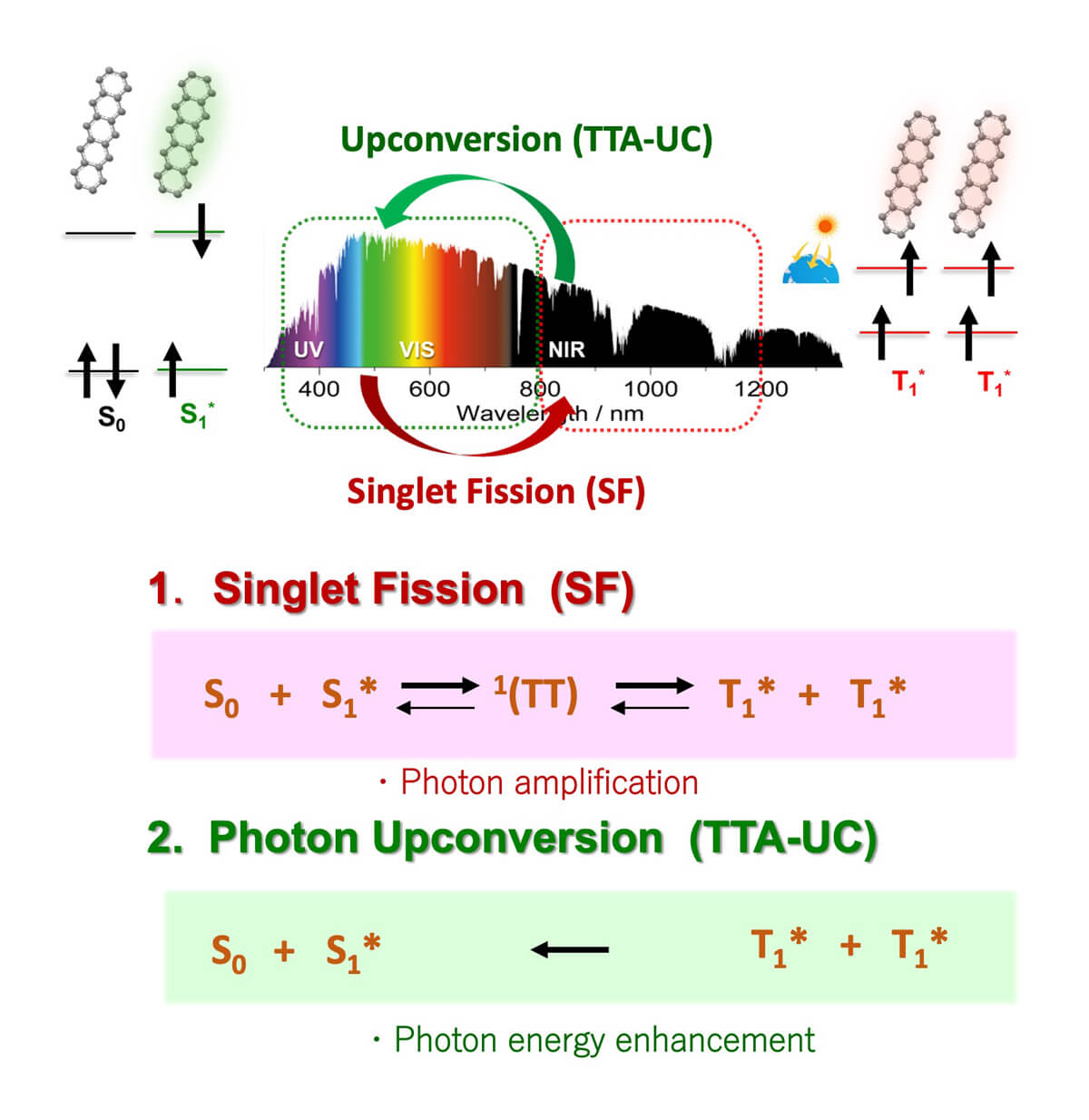 In this study, we mainly focus on the following issues.
(1) The concept of molecular self-assembly is introduced to the field of singlet fiction (SF). More specifically, we develop a methodology to promote SF by precisely aligning chromophores in self-assemblies. In order to improve the efficiency of SF, it is essential to simultaneously achieve (i) “asymmetric chromophore arrangement” for the efficient formation of triplet pairs and (ii) to facilitate separation of the two excited triplet states so that their recombination is avoided. To achieve both of these issues, we propose asymmetric yet regular molecular self-assembly. The SF characteristics of the asymmetrically aligned chromophore arrays will be evaluated by ultrafast spectroscopy, and the effect of the specific molecular organization on SF will be elucidated.

In addition, we will introduce nano-gap plasmonics 8 to the field of self-assembly-based UC, and a methodology for enhancing low-intensity excitation light for NIR-To-Vis UC will be developed. The relative arrangement of D and A is defined by immobilizing NIR-sensitisor molecules on the surface of 2D-metal nanocrystal arrays arranged at nano-gap intervals, followed by depositing acceptor self-assemblies.

Through the realization of molecular self-assembly-based SF and TTA-UC in the NIR-to-Vis region, a field of molecular systems chemistry will emerge that contributes to the control of the dynamics and functions of excited triplet states and the advanced utilization of light energy. It will lead to a paradigm shift in supramolecular chemistry and in photofunctional materials chemistry

Publications Relevant to the Project